Dangerous prescription-only drugs are being marketed to teens as weight loss solutions on TikTok, an investigation has found.

One drug floating around under the #dietpills label is topiramate, which is dispensed to people with debilitating epilepsy and migraines.

When used correctly, the drug – which is currently undergoing government review to determine if it is safe – can effectively treat these issues.

It can also lead to loss of appetite and weight loss in users.

But it can also lead to rare but serious complications, such as glaucoma and kidney problems. 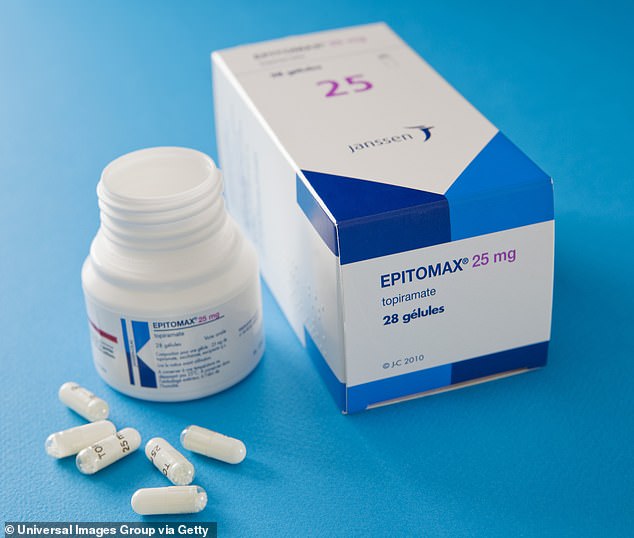 One such drug that was promoted by TikTok users as a weight loss aid was the prescription-only drug topiramate, which is given to people suffering from seizures and migraines. It is currently undergoing a government safety review after its use was linked to birth defects when taken during pregnancy

What weight loss drugs are currently approved in the UK?

According to the NHS, a good diet and regular physical activity are the best ways to lose weight.

However, for those who cannot lose excess fat this way, there are two medications currently approved for use.

It is a pill taken up to three times a day.

It prevents fat from being absorbed by the digestive system which is then flushed out of the body as faeces.

It helps prevent people from gaining more weight, but does not cause weight loss on its own.

How can I get it?

In most cases, orlistat is prescribed by a doctor if someone has tried to lose weight before but failed.

An over-the-counter version called Alli can be purchased from pharmacists.

Does it have any side effects?

Greasy or oily poop, oily discharge from the rectum and high levels of flatulence.

An appetite suppressant drug given by daily injection.

It alters metabolism, making you feel fuller and less hungry. This causes you to eat less and, in theory, lose weight.

How can I get it?

Liraglutide is usually only prescribed after you have been referred to a specialist weight loss service by a GP and when orlistat has not worked.

People should maintain a balanced diet and exercise regularly while taking it.

Does it have any side effects?

The most frequently reported are pain, diarrhea, fever, frequent urination and sleep disturbances.

The drug has also been linked to birth defects if taken during pregnancy or when trying to have a baby, prompting the government to launch a safety review in July.

Investigators found that nearly a third of the top 100 posts on the social media platform’s #dietpills tag were pushing tablets as a way to stay slim.

This is despite the fact that the account used was registered as belonging to a 16-year-old girl.

Additionally, a quarter of these posts promoted topiramate or other prescription-only drugs.

In some posts, users said the pills helped “curb” their appetite and raise their body temperature to lose substantial amounts of weight.

Experts today said promoting the drugs as weight loss aids was ‘completely inappropriate’ and there was a danger they could cause ‘real harm’.

The UK only lists two drugs as safe and effective treatments for weight loss, but neither is routinely offered to children.

These are orlistat, available over the counter in major pharmacies, and liraglutide by prescription only.

However, a range of other drugs can also induce weight loss as a side effect.

This is either due to their impact on internal brain chemistry, and therefore appetite, or metabolism, which influences the amount of food their bodies process.

The Pharmaceutical Journal survey found that the most commonly promoted diet pill was phentermine, which is not authorized for use for weight loss in the NHS.

However, it is offered by some private slimming clinics.

A combination of phentermine and topiramate was approved as a weight loss treatment in the United States in 2012.

Other drugs touted as weight loss aids include naltrexone, a drug that helps people who are addicted to alcohol and opiates kick the habit.

Side effects of this drug include loss of appetite, impotence, depression and, in extreme cases, liver damage.

At the time of the survey, TikTok’s diet pill label had amassed 10 million views.

The most popular post has been liked over 20,000 times and shared by over a thousand users.

Responding to the findings, a spokesperson for the British Dietetic Association said the claims promoted on TikTok were dangerous, especially for teenagers.

“Unrealistic food claims not backed by scientific evidence on social media can be dangerous no matter what your age,” they said.

“But, for those under 16, they can have very real consequences.”

Professor John Wilding, an expert in cardiovascular and metabolic medicine at Aintree University Hospital, said the promotion of the drugs as a cure for obesity on social media was “completely inappropriate”.

“Those containing phentermine can be legally prescribed for short-term use, but only under very specific conditions,” he said. “It remains a controlled drug.

“Topiramate has never been approved for weight loss in the EU or UK because it has significant potential adverse effects and may be teratogenic.”

Teratogenic is the scientific term for a drug that can cause birth defects if taken by a pregnant woman.

A TikTok spokesperson said they “care deeply about the health and well-being of our community.”

“Our community guidelines make it clear that we do not allow the promotion or trade of controlled substances, including prescription weight loss drugs, and we will remove content that violates these policies,” the spokesperson added.

TikTok removed some of the videos reported by investigators, but not all.

More than 42 million adults in the UK will be overweight or obese by 2040, Cancer Research UK projects

NHS recommendations state that a good diet and regular physical activity are the best ways to lose weight.

GPs and pharmacists usually only offer weight loss medication if a person has made a substantial effort to get rid of their bulge.

Excess weight is believed to be one of Britain’s biggest and fastest growing health problems, with latest data showing that 64% of adults are overweight, and more of us should be fatter in the future.

Obesity is not just increasing Britons’ height but also healthcare costs, with the NHS spending around £6.1billion treating weight-related illnesses like diabetes, heart disease and some cancers between 2014 and 2015.

In the United States, an estimated 73.6% of adults are overweight or obese.

WHAT SHOULD A BALANCED DIET RESULT IN? 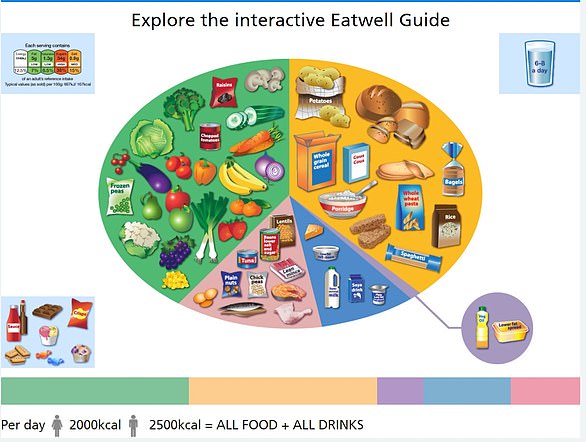 Meals should be based on potatoes, bread, rice, pasta or other starchy carbohydrates, ideally whole grains, according to the NHS

• Meals based on potatoes, bread, rice, pasta or other starches, ideally whole grains

• 30 grams of fiber per day: This is equivalent to eating all of the following foods: 5 servings of fruits and vegetables, 2 whole-grain crackers, 2 thick slices of whole-grain bread, and a large baked potato with the skin on.

• Eat beans, legumes, fish, eggs, meat and other proteins (including 2 servings of fish per week, one of which should be fatty)

• Choose unsaturated oils and spreads and consume them in small amounts

• Drink 6 to 8 cups/glasses of water per day