An assortment of smells fills the kitchen of the Dallas Zoo Animal Nutrition Center every day.

Mid-morning, team members slice fresh produce on a long metal table in the center of the kitchen, while bins of fish, mice and other meats sit on carts nearby, waiting to be packed into meals. In a side room, bins of birdseed and bags of dry food for chickens, turtles, horses and other hooves are stacked almost to the ceiling.

The nutrition department is a well-oiled machine that feeds over 2,000 animals every day of the year – in bad weather, during holidays and throughout the COVID-19 pandemic, even though the zoo has been temporarily closed. to the public.

“We’re like the post office – no rain, no sleet, no dark of night,” said Kerri Slifka, the zoo’s nutrition curator. “There is someone here 365 days a year. … On Christmas Day, when everyone opens their presents, or Thanksgiving, we have people making diets for the animals.

At 6:30 a.m., the nine-member team and a few volunteers arrive at the zoo to deliver the day’s meals, which they prepared the day before. Then it’s back to the kitchen to prepare the next day’s feast.

“The same things that you do in your kitchen, that a restaurant would do in their kitchen, we do too,” Slifka said.

Slifka, who has held the position since 2006, plans and oversees the 250 different types of diets the team distributes to the zoo’s more than 400 species every day. The Dallas Zoo is one of 15 zoos in North America with a dedicated nutritionist on staff, she said.

Preparing meals for the thousands of animals that live at the zoo is no small feat.

The nutrition team spends more than five hours a day carefully measuring each animal’s portions using scales and a “cookbook,” a binder that contains a daily schedule for each animal’s meal.

Around 9 a.m., the team is busy preparing meals for the primates, hippopotamuses, giraffes and other frugivorous species.

It is precision work. The amount of food in each meal and the size of each bite can vary by species, and even by animal.

“I’ve always liked to know how things work, and it’s fascinating,” said Genie Hargrove, a volunteer who works with the team once a week.

The 75-year-old has spent eight years volunteering at the zoo, the last two of which preparing meals for primates and sloths.

“Every day is different,” she said as she sliced ​​a fruit for a sloth, noting that the length of the slices should be just right for the sloths to grab.

In addition to their regular diet, most pets are also regularly given new foods – usually anything that’s in season – to help keep things fresh and rewarding. Zookeepers can also order different foods or treats from the team, “just like you would order from Kroger,” Slifka said.

‘A million different things’ to think about

When planning each animal’s diet, there are “a million different things” to think about, including age, weight and other health factors, Slifka said.

Once a month, Slifka assesses groups of animals to determine if any changes need to be made to their meal plans. But it’s largely a team effort; diets are constantly changing and Silkfa is in constant contact with zoo staff to keep up to date on each animal’s health.

“Part of being a nutritionist is being a really good communicator,” she said. “I will be in touch with everyone from frontline zoologists to curator and liaising with vets as well.”

One of the biggest challenges of the job is managing newborn and young animals in the zoo.

Planning for a new arrival takes months and starts with the mother. Slifka offers a diet that supports baby’s growth during pregnancy, and the planning doesn’t stop there.

“We hope that mum will take care of the children. But we are always ready in case they don’t,” Slifka said.

The team keeps a variety of formulas on hand so they can replicate breast milk for infants if needed.

Milk “changes during lactation,” Slifka said. “We’re trying to match protein, fat and energy with what we know about mom’s milk.”

Once the animals are born, Slifka also offers a diet to support their growth into adulthood. The three lions born in 2020 and the three Sumatran tigers born last year, for example, still require specialized diets to support their development.

“[The lions] grow very fast, so they get more than adults because they grow like a teenager,” she said. “The same with our little tigers; they grow like crazy and eat a lot.

“It’s personal for us”

The zoo’s kitchen is like a restaurant in many ways. The zoo orders produce and meat from many of the same suppliers, follows the same health and safety guidelines, and faces many of the same challenges.

During the pandemic, one of the team’s biggest struggles has been dealing with supply chain issues like those shoppers likely noticed at the grocery store. Food at the zoo is ordered months in advance, but roadblocks still occur.

Slifka said part of the job is to come up with multiple contingency plans in case a food or ingredient can’t be delivered.

“We try to anticipate what it might be and make sure we have their product,” she said. “There were a few hiccups. There are a few products that for some strange reason can’t get the raw materials needed to make the boxes for one of our primate diets, so it’s hard to get them. So we have to find a substitute or make cuts.

For many team members, being part of every animal’s day is what makes the job rewarding.

“I like my food to look good to them, so it looks tasty to them,” said Marshall Keaton, 67, who has worked on the zoo’s nutrition team for 31 years, as he prepared a crate of lettuce for one person. troops of zoo gorillas.

“It’s something you did for them,” Keaton said. “You see things on TV that they do at the zoo, and you see food that they eat. It makes me feel good to know that they are eating something that I prepared.

Once each meal is portioned, staff vacuum seal it into a bag and write each animal’s name on the packaging.

“We like to put the names on it, because it’s personal to us,” Slifka said. “We literally pack lunch for the whole park.” 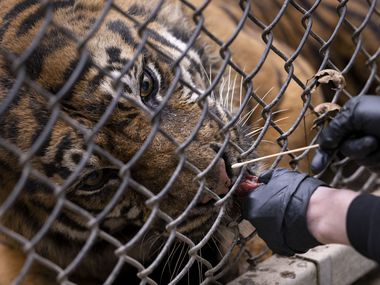